Employers talk a lot about resilience these days. Commonly described as the capacity to deal with life’s daily pressures, resilience is valued as much as a great attitude or killer resume.

Because today work is uncertain.

And Employers need people with the moxie to stick with things.

People who tap on their internal resources and deal with the ebb and flow of life at work.

But a lot of folks make complaining about work a national pastime.

“The boss is terrible, no one knows what’s going on, the pay rises are so low, everyone gets better benefits than us…”

What if you were disabled?

In a survey released last month by Singapore philanthropic house Lien Foundation, findings suggest that Singaporeans are tolerant towards, rather than accepting of, those with special needs.

64 per cent of the more than 1,000 people polled saying they believe Singaporeans are willing to share public spaces but not interact with the special needs community.

And a survey of 1,000 people with disabilities, released earlier this month by the National Council of Social Service, found that 62 per cent do not feel they are included, accepted, given opportunities to contribute or reach their potential by society. With our assistance, most begin looking for jobs right after completing their program with us.

A few of our students had been employed earlier and they shared stories of their past job experiences.

“Anne” had been hired into a large Contact Centre (prior to our training).

She was assigned to a Team.

But rather than sit with the Team she was asked to work on the ground floor.  Her Team was located on the second floor.

Later on she found out that the seating arrangement had been orchestrated to allow the company to claim a government subsidy.

In her first week at work she was not formally introduced to the other Team Members in her Team.

Over the next months, she was not invited to participate in Team activities.

She told me that she felt that her disability made others uncomfortable – including her new boss. And her own natural reserve held her back from expressing how she felt to her boss.

Her one year contract was not renewed – and no explanation was provided to her as to the reason.

She tells us she is happy and that she feels well integrated into her new place. For these folks, disabled ‘later in life’, the first challenge was to overcome the trauma and recovery associated with the accident.

Then came the changed the second challenge.

The social reality of trying to reintegrate back into society.  And the desire to get back to work and fulfill their potential.

Everyone has a story 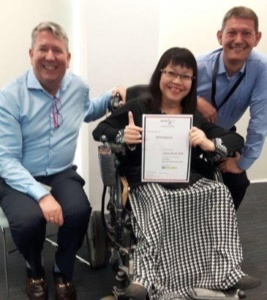 Never have I seen participants so motivated to learn, so friendly and courteous.

They were eager to work and use their new skills in their new jobs.

They are resilient indeed.